The Companion is an extraordinary beautiful Norwegian tale of marvel.

We are taken on a journey to the heart of the imagination : this story stands out for its original structure, for its icy and magical suspense, set in a Nordic climate where trolls are everywhere…
We are completely surprised by the unexpected and sudden violence of the characters and the story.
In his quest to find and bring home the woman he sees in his dreams, a young boy, naïve and generous of character, is guided by a mysterious companion. During their journey of initiation, strewn with terrible trials and pitfalls, the young boy manges to conquer his dreams and his liberty as a man : he is helped by his companion, who behaves towards him like a father, a friend and a symbol of destiny.
This play is a chance for the tale of marvel to play its role at the heart of storytelling : this form of story is often misunderstood.
In this version, the tale of marvel is given a rightful space : a body, a voice, a drum. 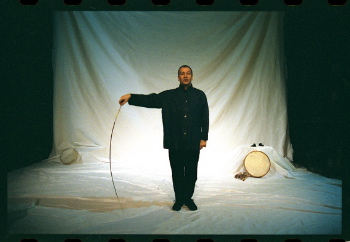